Since Mac OS 8.1 (nine years ago) Apple OS has run on the HFS+ filesystem (which in turn is based on the 22 year old HFS), but maybe soon we will see a major upgrade with the introduction of the Zettabyte File System (ZFS). ZFS is very powerful for a number of reasons – and could make a huge difference to the user experience.

ZFS is a 128-bit file system, which means it can store 18 billion billion (18.4 × 1018) times more data than the current 64-bit systems. The limitations of ZFS are designed to be so large that they will never be encountered in practice, as an example of how large these numbers are, if 1,000 files were created every second, it would take about 9,000 years to fill the file system. As project leader Bonwick said:

There are, however, a number of other notable features:

Pooled storage
ZFS can span a file system seamlessly across multiple disks and more can be added at anytime. This is good because it means a new hard disk can be added at any time, thereby adding redundancy and increasing performance by spreading i/o access across multiple disks. But is also improves the UX because users don’t have to worry about volumes, they just have storage.

All this results in an incredibly robust filesystem, during Sun’s tests [pdf] it has been subjected to over a million forced, violent crashes without losing data integrity or leaking a single block.

The use of checksums on all data and metadata allows for ‘self healing‘ – ZFS can repair (using the data from the other mirror) silent data corruption by detecting the corruption before passing the data of to the process that asked for it. 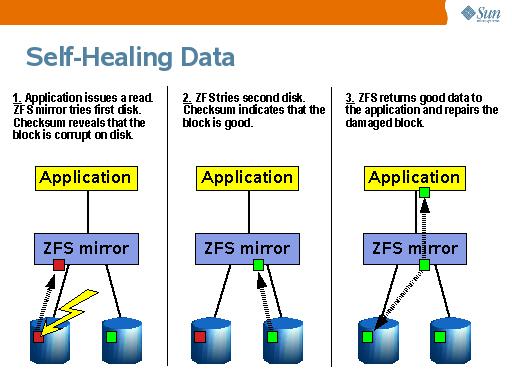 A snapshot is a copy of the entire file system, snapshots are not the same as backups, the two most significant differences are efficiency and speed.

A snapshot only stores the individual disk blocks that have changed, this means that a snapshot uses far less disk space than a traditional backup. Snapshots also happen instantaneously regardless of the size of the file system size, indeed the time it takes to create a snapshot is often so small that there appears to be no delay.

Beyond the obvious benefits related to performance and data integrity there may also be important UX considerations.

I’ve written previously about the issues of the two copy file system, now the ZFS’s use of snapshots would mean that there would be very little performance or storage overhead in automatically versioning data. This would mean Apple could remove the Save dialogue box from much of the UI; files could automatically be safely saved in the background with old versions retrieved via Time Machine as needed thereby removing the need for explicit saves and hiding more of the filesystem from the user.

One thought on “The Zettabyte File System (ZFS) is coming to Mac OS X – what is it?”