Last month the BBC announced that it would launch a limited number of mobile app, starting with News and Sport  and then possibly an iPlayer app. Unsurprisingly the NPA promptly complained that the BBC would “damage the nascent market“, and now the BBC Trust as said that it wants to review the plan and that means a delay.

Well I don’t know about whether such a move by the BBC would have an impact on the market or not (although I agree with Martin, I think it was inevitable that the Trust has would review the plans), but I do think the BBC could tackle the problem in a different, more open way. 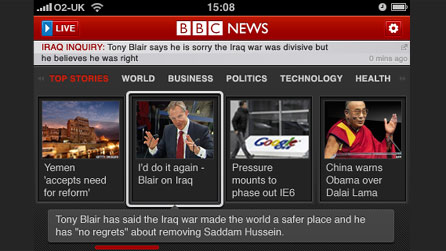 There’s a lot of hype and hyperbole around mobile apps – and in some ways you can understand why, lots are downloaded and some folks are making money from them but I’m not so sure it’s going to last. I suspect that mobile apps are successful for a few reasons:

But as phones expose more of their API to the browser, as HTML 5 with its support for offline browsing and other goodies becomes adopted and, as libraries and support become available so the technical and user experience barriers start to become less relevant — it may once again be universally seen as sensible to develop web apps. Of course either the fear of being locked in or being locked out of the relationship with their customer might kick companies along a bit too.

So in the near future we should be able to build web apps every bit as good as mobile apps? Yes, but I would go further: for most of the things the BBC wants to do, the technology is already good enough. And with a web focused mind set you can start to invest in the sorts of things you can only do server side — just look at the sorts of things Google are building: word processors, voice communications, email clients, image recognition, maps etc. I think it’s better to embrace the future than play catch-up with the near past.

But what if I’m wrong and mobile apps are the future of content delivery? Well the BBC could still take a different approach – one where it licensed its content in such a way that others could build apps with its content. Of course, unless things changed, the app would need to be non-commercial and the use of the BBC logo and brand would be protected. Of course the non-commercial aspect might be reviewed under certain circumstances — indeed the BBC already licenses content to third parties both outside and inside the UK via its commercial arm BBC Worldwide, why not online? Although I can’t see any circumstance under which the BBC would allow use of its brand and logo since this is central to protecting its reputation, to avoid this sort of thing.

If the BBC did license its content in such as way as to allow others to build stuff then we might see all sorts of interesting innovation on all sorts of different devices and not just mobiles. Perhaps I’m missing something but I don’t see why the BBC needs to control the entire distribution chain, from encoding to eye balls, when distributing content over IP but not when broadcasting to your TV or radio. The BBC doesn’t make its own televisions nor radios instead it lets the market manage that bit, why not encourage the same sort of thing on the web?